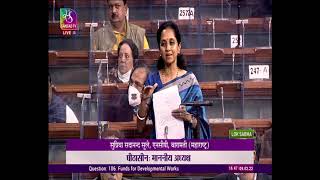 Raised question during Question Hour of Budget Session 2022 regarding under-bridges and over-bridges on Railway tracks. Cited the need of quick intervention from the Government to address the situation.
190
13
0 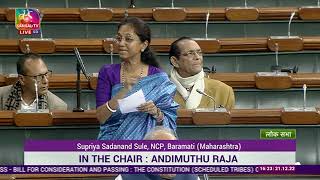 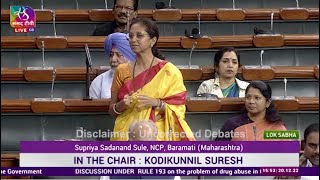 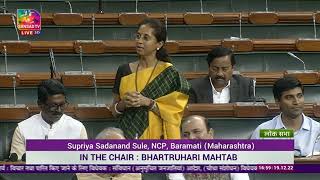 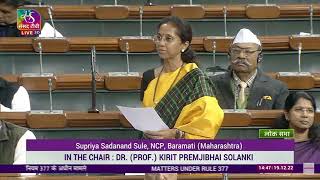 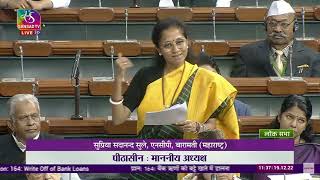 MP Supriya Sule Questions on Write off of Bank Loans 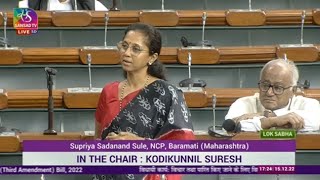 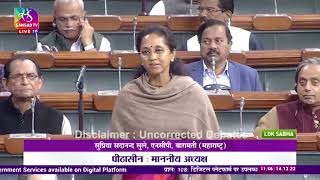 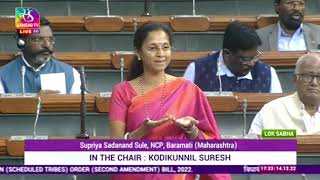 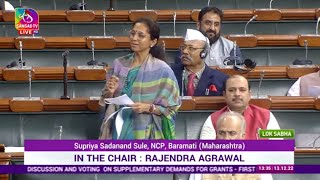 MP Supriya Sule on Supplementary Demands for Grants 2022 23, Demands for Excess Grants for 2019-20

Spoke on the supplementary demand for grants. Brought attention of the house to the success story of Maha Vikas Aghadi Government’s finance management in Maharashtra. During the pandemic, While the Centre had withdrawn the MP fund, MVA allocated 5 crores to each and every MLA in the state. Reminded the Centre that States have played an equally important role in fighting the pandemic. The BMC (Brihanmumbai municipal corporation) was awarded for their dedicated efforts to fight the pandemic. Questioned the Centre regarding allocation of funds to the Vayoshree Scheme particularly in Maharashtra. Addressed the issue of rupee weakening against the dollar. It is important to note that international trade takes place in dollar and hence, it is necessary that the Centre strengthens the rupee Lastly, questioned the Centre on the amount of black money obtained as a result of demonetisation.
173
9
0 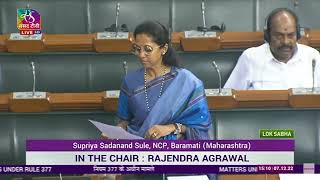 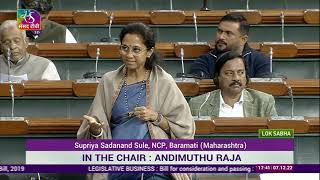 Discussion on The Anti Maritime Piracy Bill, 2019. The Bill to make special provisions for repression of piracy on high seas and to provide for punishment for the offence of piracy and for matters connected therewith or incidental thereto.
1091
20
0 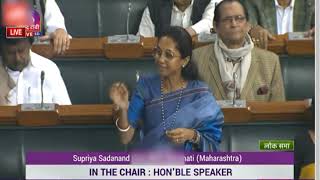 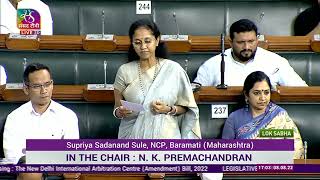 Spoke on the New Delhi International Arbitration Centre (Amendment) Bill, 2022. Highlighted that there is a need for Government to introspect on why Singapore and London arbitration centres are preferred by Indian parties over Indian arbitration centres and accordingly take action. The Bill serves the interests of a certain sect of private people players and does not have the desired impact of promoting arbitration in India. In light of this observation, the Government should not misspend its time on bills which do not have the desired impact.
683
16
0 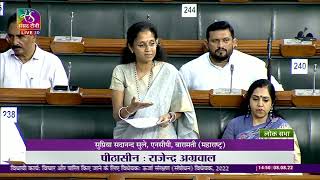 Spoke on the Energy Conservation (Amendment) Bill 2022 -Sought clarification on whether India has dropped in its target of establishing 500 GW of renewable capacity by 2030. -Drew attention of the House to India`s communication with UNFCC it admitted about that 50% cumulative electric power capacity from non-fossil fuels has dropped out of the 500 GW which it committed in COP-26. Further, India has failed its target to reduce carbon emission by 1 billion tonnes. -Sought clarification of the Government on its contradicting policy stance on renewable energy. On one hand, the coal and mining ministry are vigorously implementing schemes whereas on the other the Government appears to be promoting renewable energy. -Pointed out that Maharashtra has been at the forefront of promoting renewable energy. In Sugarcane factories in Maharashtra implemented renewable energy. -Posed a question on with regard to Biomass. The said bill seeks to promote biomass, however, biomass industry experiences a large number of NPAs. How does the Centre plan to achieve its target while dealing with NPAs. Further, expressed concern over Biomass` inability to deliver superior results. -With regard to solar energy drew highlighted the challenges faced for land acquisition as it takes about one year to merely acquire land for a solar project which demands thousands of acres are required. Suggested that the Government of India should work closely with the states. Proposed the MIDC model can be followed. -During the pandemic, a blanket extension was granted to the windmill industry. This boosted the supply chain. Suggested that a similar action should be taken for solar energy industry. -Posed a question on the policy intervention of reverse bidding. Usually, the L1 is given preference despite conducting a reverse bid. This results in pushing away the private players who want to build in India. -The measures taken by the Government to promote R&D in the field on Renewable Energy. Over the past three years, the amount earmarked for R&D has dropped and the Government has been unable to meet a single target. -Highlighted that the Government has not taken adequate measures to ensure transmission and distribution of energy. -With regard to carbon credit rating, no public consultations were held. This is contrary to the inclusive approach of policy-making.
640
23
0 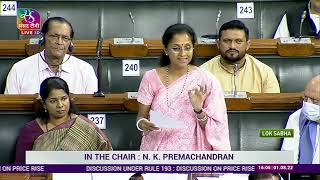 Participated in the discussion on Price Rise under rule 193 in Lok Sabha. • Drew attention of the house to the far reaching impact of price rise and the open letter written by a 6-year old Kriti Dubey from Uttar Pradesh on price rise of pencils and maggi. • Condemned the imposition of GST on all basic goods such as paneer, curd, lassi, sugar, jaggery, puffed rice, rice, wheat, tender coconut and rice flour. • Expressed disappointment over the Centre asking people to be grateful that they have been provided with two meals a day and pointed out that it is the rightful entitlement of underprivileged, poor and malnourished citizen to have two meals a day. • Further, pointed out that the rights of the underprivileged to meals were also endorsed by late Sushmaji in her historic speeches over price rise. • Urged the GST Council to revise the imposition of GST on basic consumer goods. The Maha Vikas Agagi Government in Maharashtra had written an open letter to the GST Council on the same. • With regard to Demonetization, Bangladesh is a remittance and export drive economy. After Demonetization in India, India grew at 3.7% and Bangladesh grew at 8.2%. • Questioned the Centre on how much money is in circulation. • Drew attention of the house to certain exorbitant fees being imposed by Banks to render basic services such as Debit Card annual fee costs 200 rupees, printing bank account statements cost 100 rupees. Further services such as money transfer, cash withdrawal and cheque book are charged. • The Government imposes 12 types of cess. Questioned why is this money collected through cess not given to poor consumer. • Questioned why the wheat policy was not implemented as promised. • The Government has committed to get rid of petrol by 2030 and intro renewable energy instead. However, Centre has taxed Solar Energy at 18% which is a very high slab.
9485
347
0
Load more...